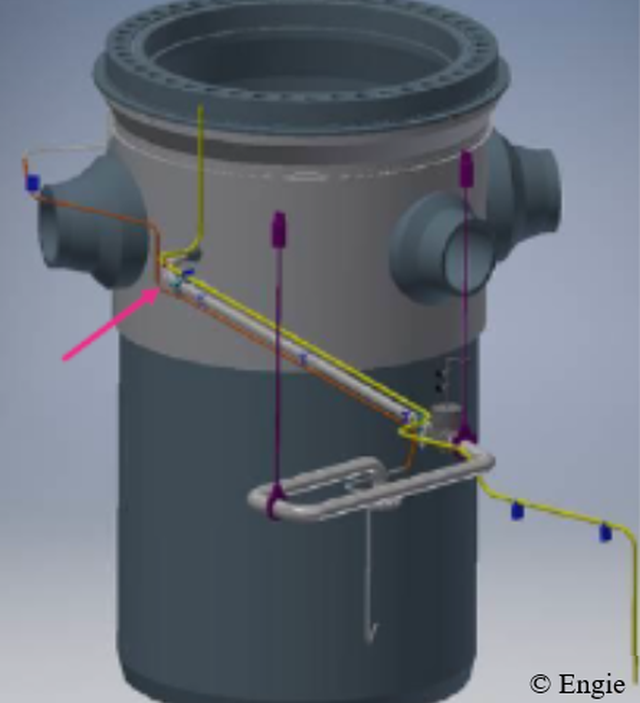 A leak suspected to have been caused by high cycle thermal fatigue due to fluctuating axial motion of a swirl penetration front end has been detected in early 2018 in a non-isolable Reactor Coolant System branch at the Doel 1 Nuclear Power Plant (Belgium).

As a part of the standard design of the Westinghouse 2-loop PWRs, the Doel 1 and Doel 2 units are equipped with ECC systems that inject water into the upper plenum of the reactor pressure vessel in the event of a LOCA, as opposed to the cold-leg injection that is also present. Each of both reactors has two 4-inch UPI lines made of Type 316 stainless steel and further referred to as UPI-A and UPI-B lines. Figure 1 illustrates the layout of the UPI-A lines. When compared to the UPI-A lines, the UPI-B lines are shorter and have a slightly different slope.

On the 23rd of April 2018, a primary leak was detected at Doel 1 while the unit was in full power operation. Consequently, the unit was brought to cold shutdown conditions. The leak was found to be located on the UPI-A line inside the reactor cavity in the pipe section downstream of the check valve, i.e., in a non-isolable RCS branch. Extensive NDE of the damaged UPI-A line including mechanized VT, ET, UT, and UT-TOFD from the inside of the pipe has evidenced several cracklike indications in the bottom part of the straight part of the pipe upstream of the weld between the straight section and the elbow close to the leak location, as well as a circumferential indication in a neighboring weld. As a result of those findings, the same NDE was performed on the UPI-B line of Doel 1 and on both UPI lines of Doel 2. These inspections highlighted similar degradation on the UPI-A line of Doel 2 at the same location. By contrast, no reportable degradation was observed on the UPI-B lines.

The affected section the UPI-A lines was removed for further laboratory investigations aiming at investigating the possible mechanisms responsible for the formation of the cracks. The outcomes of the investigations allowed the plant Licensee (Engie) to conclude that the mechanism responsible of the cracking phenomenon was fatigue. More specifically, different features heavily suggested that the mechanism is a low stress, high-cycle fatigue mechanism, possibly environmentally (primary water) assisted. Root cause analysis performed by the Licensee concluded that this phenomenon would have likely been related to the occurrence of cyclic thermal stresses in the wall thickness of the piping. A detailed understanding of how the damage could develop, implying in particular a quantitative description of all involved phenomena, could however not be provided. 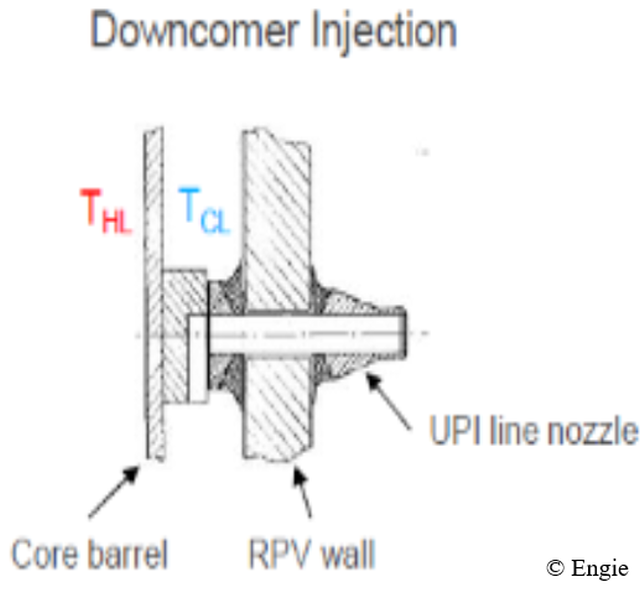 The removed sections of the UPI-A lines were replaced and a specific Safety Case has been provided by the Licensee for each unit, as a justification for their restart. Despite an incomplete understanding of the degradation phenomenon, the Licensee justified the allowance for restart on the basis of different actions among which of the replacement of the damaged UPI-lines, the planning of NDE at regular intervals as well the continuous monitoring of those lines and in particular the temperature monitoring of the external wall temperature at specific locations by means of the FAMOSi Data acquisition system. In answer to Bel V’s concern, the Safety Cases were based on the application of the Defence in Depth principle, by showing how the actions defined in the Safety Cases are related to the first three Levels. After evaluation, Bel V concluded that the Doel 1 and Doel 2 plant might be operated safely during a time period of one fuel cycle, which is expected to be the time necessary to identify and quantify the thermal cyclic loadings suspected to be the mechanism responsible for the detected cracking. Authorization for restart was granted by the Belgian Federal Agency for Nuclear Control and both plants resumed operation early in 2019. 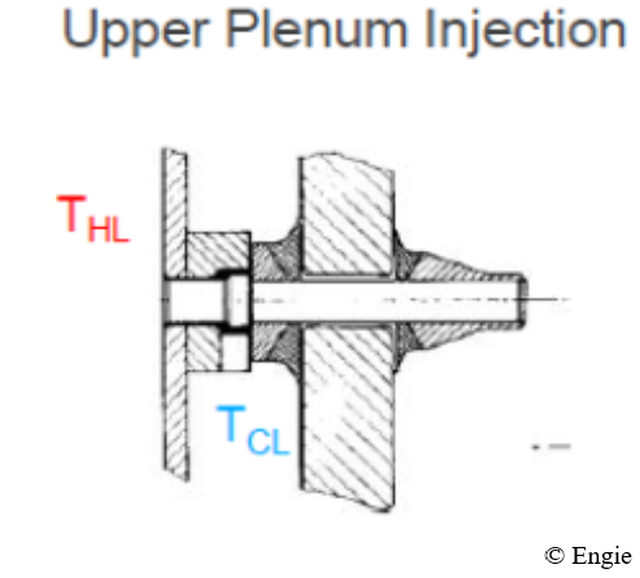 During the 2019 fuel cycle, two major achievements should be highlighted. First, the temperature measurements recorded by the FAMOSi system during four different plant conditions, i.e. cold shutdown, heat-up, hot stand-by, power ramp-up and full power were made available and analyzed by the Licensee by means of a homemade computer code allowing to estimate the temperature evolution of the fluid inside the pipe from the recorded temperatures. Although the FAMOSi system has experienced reliability issues, some conclusions were able to be drawn from the temperature records. Temperature fluctuations were observed on all UPI lines as soon as at least one reactor coolant pump is running, whatever the plant condition. However, those temperature fluctuations are not significant , which led the Licensee to conclude that the thermal cycling which was suspected to be at the origin of the observed cracks is rather a consequence of cycling flow structures inside the lines. Secondly, the results of Computational Fluid Dynamics (CFD) calculations performed by the Licensee have been issued. Those calculations point out that cycling flow structures could develop in UPI-A lines in the presence of a gap between the reactor vessel UPI nozzle and the core barrel. The presence of this gap, which has been confirmed during the visual examinations carried out on the inside of the UPI lines, is a side effect of the reconfiguration from downcomer injection to upper plenum injection. The pressure difference existing between the downcomer and the upper plenum generates a flow through the gap, which then induces a swirling structure extending in the UPI-A line up to the degraded region if adequate non-symmetric flow ingress through the gap is assumed. Beyond that swirl penetration zone, a natural circulation loop with stratification is present. Between those thermal fields, a transition zone occurs with potentially high temperature difference. The CFD calculations also confirm that, if slightly varying gap boundary conditions are assumed, the extension of the swirl region moves back and forth, which induces large temperature fluctuations in the degraded region. With regard do that, it should also be pointed out that the assumed mechanism also explains why the UPI-B line is not or less affected than the UPI-A line. The better thermal insulation on this former line indeed induces a smaller thermal axial gradient along the line, especially in the natural circulation loop zone. This explains why smaller thermal fluctuations will occur when the extension of the swirl zone moves back and forth.

However, convincing experimental demonstration could not be achieved due to lack of temperature measurement sections at some critical locations but also to a lesser extent, due to the reliability issues encountered by the FAMOSi system. In order to hopefully conclude about the identification of the mechanism responsible for the damage phenomenon and the explanation of the occurrence of the damage phenomenon under the assumed mechanism, the Licensee decided to remedy the malfunctions of the FAMOSi system and to install additional measurement sections during the next refuelling outage of the units.

During the 2019-2020 outage, several non-destructive inspections have been carried out on the UPI lines of Doel 1 and Doel 2, according to the programme agreed with the Safety Authorities. Depending on the part of the line, VT, UT, LP and/or RX techniques have been used. No reportable indication has been detected.

In March 2020 an Addendum Safety File was issued by the Licensee, which summarizes the results from the most recent investigations, reassesses the Root Cause Analysis and justifies the safe operation of both plants Doel 1 and Doel 2. The request of the Licensee to allow the restart of the Doel 1 and Doel 2 unit was accepted by the Federal Agency for Nuclear Control, with due consideration of the Addendum Safety File and the inservice inspection program of the UPI lines.

A first assessment of the temperature monitoring results is expected by the end of September 2020.